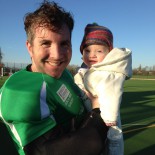 It is all very well to be able to write books, but can you wiggle your ears?

I am a writer and an award winning BBC broadcaster. I was born in Birmingham, England but I now live in a stone cottage in the Cotswolds. I’m thirty seven years old. Some days I still feel like a kid. Other days I feel old as the hills.

I started writing last year in Kandahar in Afghanistan. I was on a reporting trip for the BBC and did a lot of blogging while I was there. A few people said they enjoyed reading it and convinced me to write something longer. I finished the first draft of Fearless two months later. It was about eighty thousand words, and I sent off the first three chapters to the Darley Anderson agency. They represent Lee Child and Martina Cole. I didn’t really think would take me on in a million years. But they liked the chapters and asked to see some more. It turned out that they liked the rest  of it too, and they signed me up.